Are Police Sent by God

Throughout history, oppressive regimes have tried to suppress or outlaw the Bible. In the "land of the free," the adversary is more devious. Bible paraphrases change the Truth of God into lies to support the State's agenda. (See Romans 1:25)

The words chosen are not Bible words, they are statists' words. The changes are subtle, but the effects are dramatic. For instance, in the Living Bible paraphrase of Romans 13, we are told that if we refuse to obey the "law of the land," we are refusing to obey God. This is just another clever means of persuading Christians to take up citizenship with the kingdoms of the world.

The Living Bible paraphrase also says "the policeman is sent by God to help you." Is this job of "policeman" created by and for Jesus Christ, or was it created for "other purposes?"

A policeman is a mere man, but he must conform himself to the office of policeman. It is a role similar to acting in a play. A playwright creates the role and determines how a particular character will act. The State creates the role of a policeman and determines what type of behavior he is going to have, what uniform he will wear, and what laws he will enforce. Whoever takes the role of policeman, must perform the particular job as specified. Otherwise, he's fired. It does not matter what his moral convictions are. His office dictates his behavior.

Our job is to determine whether the policeman truly is sent by God, or whether he is a stranger. A stranger we are not to follow. We are to flee from him (John 10:5).

The King James Bible talks about "a minister of God" (Romans 13:4) who praises that which is good and executes wrath upon him that does evil. The police see themselves as an avenger of evildoers. Yet look at the evil acts the police themselves commit, both in Biblical times and today.

Before we examine whether or not Romans 13 is referring to modern-day police, let's first look at the role of the police during the first century. Then we can see what roles the modern day police are playing and whether they are the "ministers of God" referred to in Romans 13.

Admittedly, most of these crimes were committed by the police on the orders of the king, the governor, or the Sanhedrin. But the fact remains: the police referred to in the New Testament are often involved in carrying out very evil deeds. Observe the role the temple police and Pilate's police played in the crucifixion. In the New Testament the police contribute more often to disorder than to order. Above all, it was the police who participated in the major disorder of all time - the execution of the Son of God. 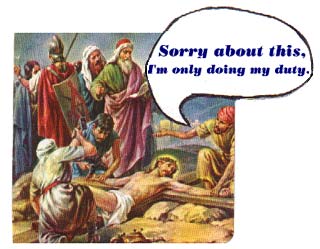 Police Crimes in Book of Acts

The book of Acts records the Apostles "going against the decrees of Caesar" (Acts 17:6-8) and being cast in prison. They were certainly not "obeying the civil authorities." Apostle Paul, the author of Romans 13, was imprisoned numerous times for going against the Roman State. Paul was even scourged and beheaded by the civil authorities. Was the Roman centurion who scourged and beheaded Apostle Paul the "minister of God" sent for our good, as referenced in Romans 13:4?

Apostle Paul said rulers are not a terror to good works, but to evil. Certainly, then, Paul must have been doing evil and the rulers did not use the sword in vain against him? Or was Apostle Paul speaking in Romans 13 about different rulers and powers, separate from the secular authorities?

It appears the police of today are performing the same duties the Roman police performed almost 2,000 years ago. The City and State authorities today get disturbed when we say there is another king, one named Jesus (Acts 17:7). They send out their police to arrest us because we are going against their decrees. They cast us in prison for obeying God, rather than men, just as the Roman police did to the apostles (Acts 5:29).

In Marion County Jail, one of the guards mockingly said to Abraham, "Oh, we don't want to hurt one of His little ones." Another policeman told him, "We've been sent by God to punish those who do not obey the civil authorities."

Police officers not only do the "dirty work" for secular authorities, they also mock us and our King. They seem to be repeating the same atrocities that the first century police committed. Their job descriptions were written long before they were even born. We are not wrestling with men. We are wrestling with the office. (Ephesians 6:12)

In reality, the police then, and now, are not carrying the torch of God. They are carrying the torch of their own bellies, their own interests, not the interest of God. And they are using force to get their own way, destroying the prophets who are carrying the message of Christ. Much can be written on the subject of psychological warfare, beatings, imprisonment and other tactics used by police - both in the first century and now. In a sense, and to a lesser or greater degree, the police in every nation continue to crucify Jesus Christ.

We conclude that Paul in Romans 13 is not referring to the civil authorities as the police of today would like us to believe. Both the Roman guard who beheaded Apostle Paul and the police of today punish those who do good, while they themselves do evil. In reality, we believe Apostle Paul is referring to the fact that all of us, including the Roman guard and the police of today, are subject unto the higher powers, the heavenly ones, "for there is no power but of God." In Romans 13, Paul is instructing us to be subject unto these heavenly powers.

The Compton's Encyclopedia says under Police: "Police patrol the streets day and night looking for trouble." That sounds like the Book of Job, Chapter 1 verses 6 and 7: "One day, when the sons of God came to present themselves before the LORD, Satan also came among them. And the Lord said to Satan, 'Whence do you come?' Then Satan answered the Lord and said, 'From roaming the earth and patrolling it.'" (NAB translation) It sounds like police are not sent by God, but by Satan.